As you probably already know, I am Chrissie Menzies and I am a textile artist living and working in Mid Wales, I am also a director of Wonderwool Wales, the largest wool and fibre festival in Wales and one of the largest in the UK. I do most of the organising and running of the event which is held annually at the end of April at the Royal Welsh Showground.

I work mainly using wet felting techniques to produce a range of bags, rucksacks and accessories, I also use eco printing for scarves & homewares. Years ago I used to do a lot of patchwork and quilting and started a patchwork group at Rotherwick WI, where we met every month at one of our member's houses. I taught them lots of different techniques and we had great fun. I also taught patchwork for beginners one afternoon a week through the council's adult education classes.

When I want a break from felting I revert to dressmaking. During 2019 I managed to finally finish a log cabin quilt that I had started 28 years ago! It is a double bed size and reached the floor. It was lovely to get it finished and on the bed for the winter and was the first patchwork that I had worked on for years. Having inherited my Mothers bed top quilt which I made for my parents' for their Ruby Wedding, and which resides on the spare bed, I decided to make another bed top quilt using William Morris pattern fabric as I have always loved his designs. 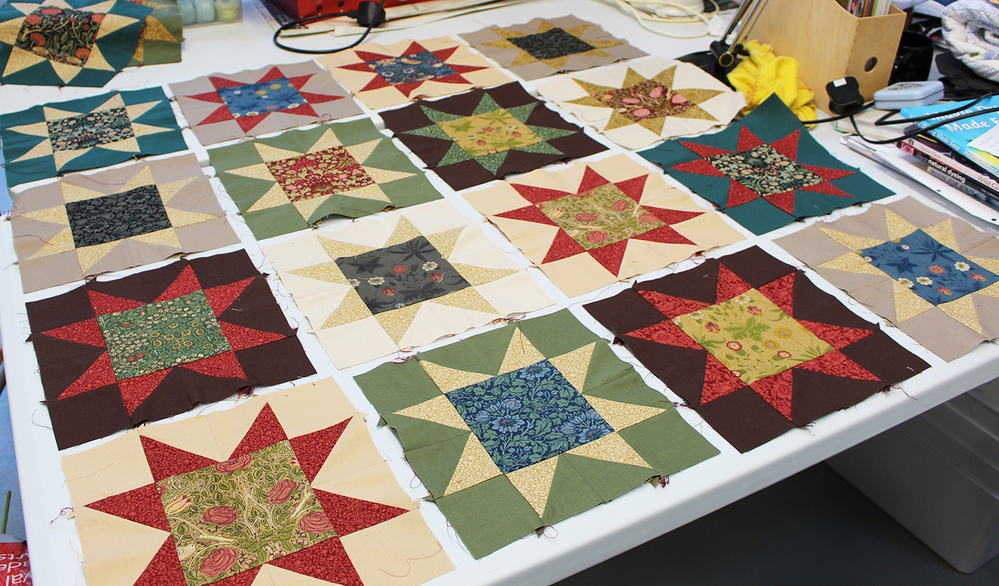 Recently I acquired a beautiful Willcox and Gibbs hand crank sewing machine through a local auction, I could not believe my luck as they do not come on the market that often & definitely not in such good condition. My hubby, Andy, checked it over and oiled it up and it was ready to go. It stitches a beautiful chain stitch. I could not resist using it for this quilt. I had a pack of squares in William Morris Fall colours and purchased a pack of fat quarters in plain autumn colours. Not having done any piecing for years it took a while to get the template right but after some good advice from the facebook UK Quilters' group I managed to get the pieces matching up when sewn. I only have 2 more squares to make up then I can start cutting the strips and putting it all together. 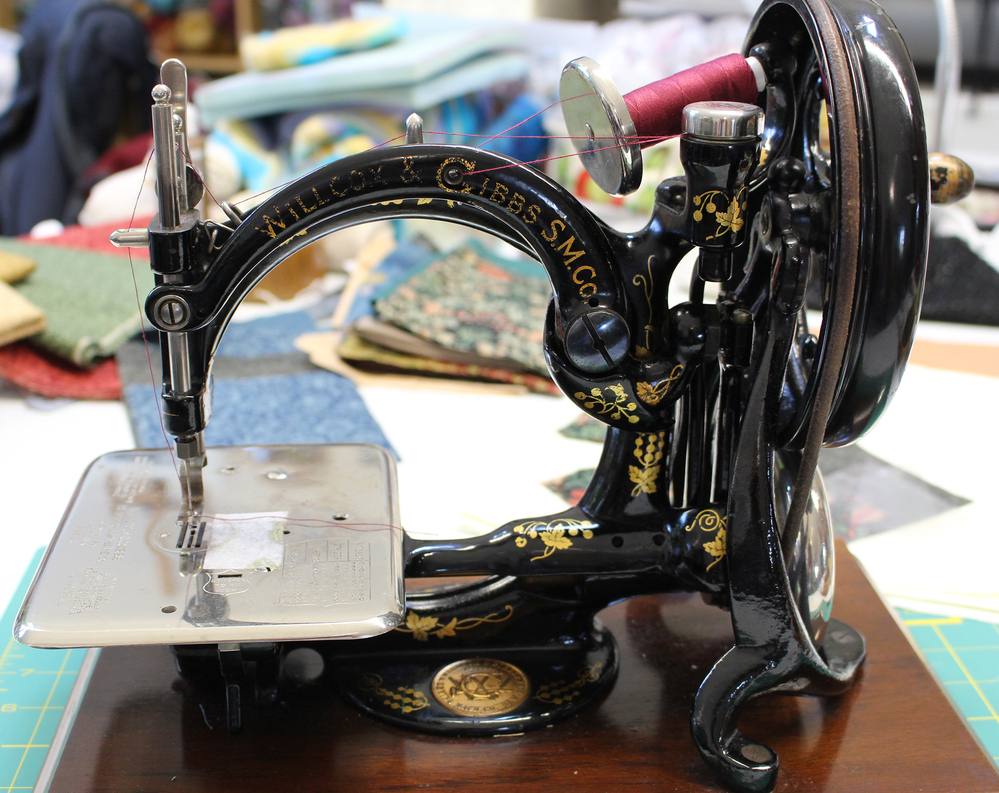 A LITTLE HISTORY ON THE WILLCOX & GIBBS SEWING MACHINE -

Manufacture in America of the Willcox and Gibbs chainstitch sewing machine, invented by James Edward Allen Gibbs, began in 1858, it was half the size and price of other machines on the market, not to mention half the threading! They originally produced treadle machines with very ornate base castings. You could have the machine on trial at home, no one would want to give the machine back once they had tried it out! The 1867 models had two tension discs made out of glass, in 1875 this was replaced with the automatic tensioner, which I have on my own machine. If you look from the back of the machine it is in the shape of a 'G' for Gibbs. In America the treadle version was the most popular but in Europe the hand crank version was far more popular.

The machines were manufactured for Willcox and Gibbs by J R Brown & Sharpe of Providence, Rhode Island, who were originally clock and watch makers so used to precision work working with super fine tolerances and to a very high quality, thus every part of the machine was interchangeable meaning that a machine could be assembled in less than half an hour. Competitors' machines could take a week. Manufacturing ceased later in the 20th century. It was the longest production run of any sewing machine in history.

In the early advertising ladies with treadle machines were advised to purchase the hand crank adaptor to enable them to take their machines on holiday with them so that they did not miss a day sewing!

I always think of making patchwork as an old craft, which it obviously is, that should be made on an old sewing machine. My log cabin quilt was pieced together on one of my beautiful old Frister Rossman hand crank machines and the quilting was done on a large Singer hand crank machine which has a wider head spacing to fit bulky fabric through. I have an old Jones hand crank machine that I used to make a pieced and quilted jacket for a godson when he was a baby. Now the Willcox and Gibbs is in use with the William Morris fabric, which seems quite fitting. The next project, fabric is on the way, will be produced using one of my other machines in the collection, maybe I will try and get to grips with the Singer treadle machine! 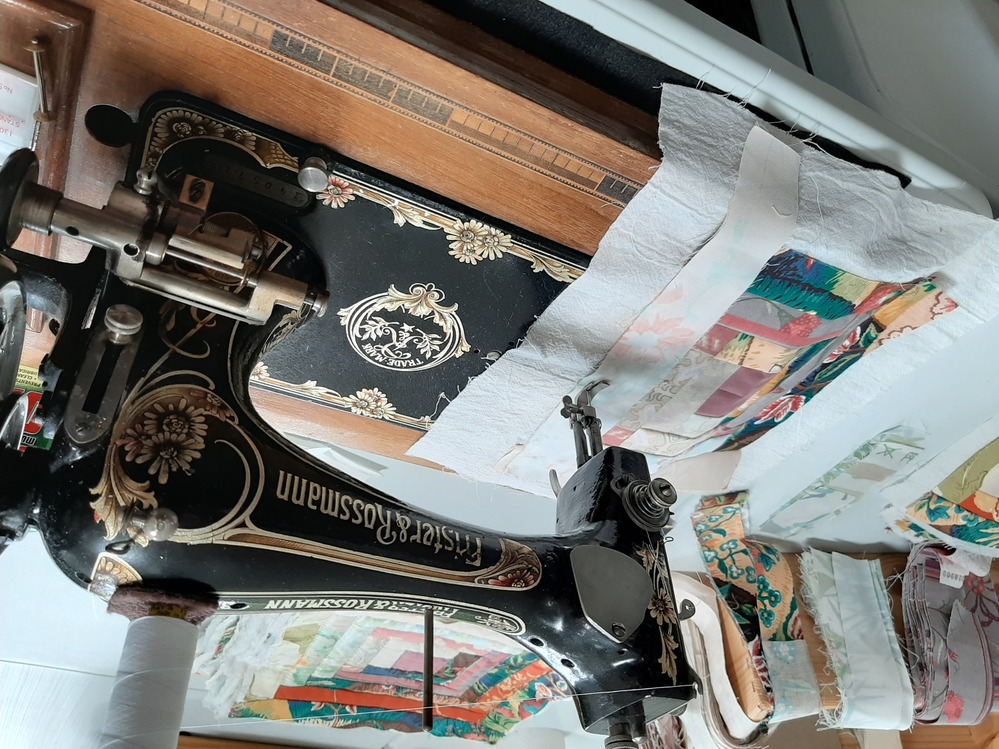 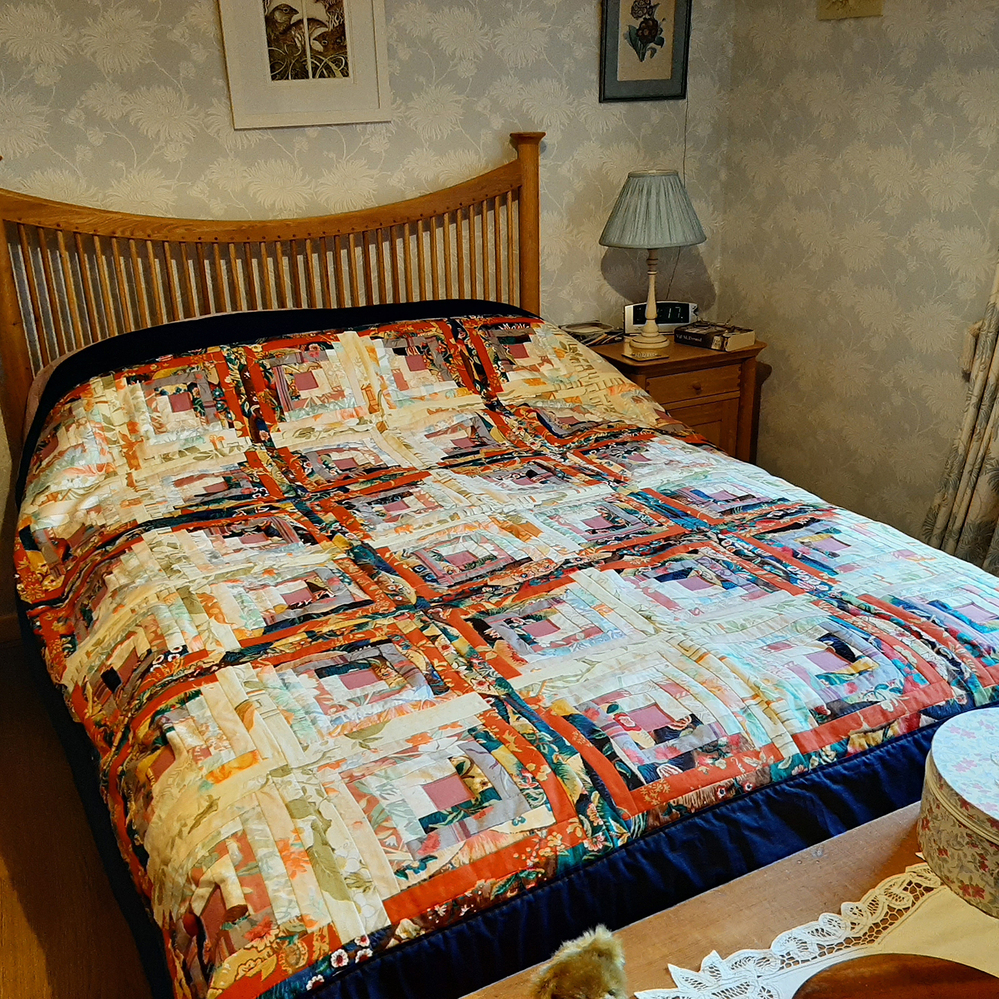 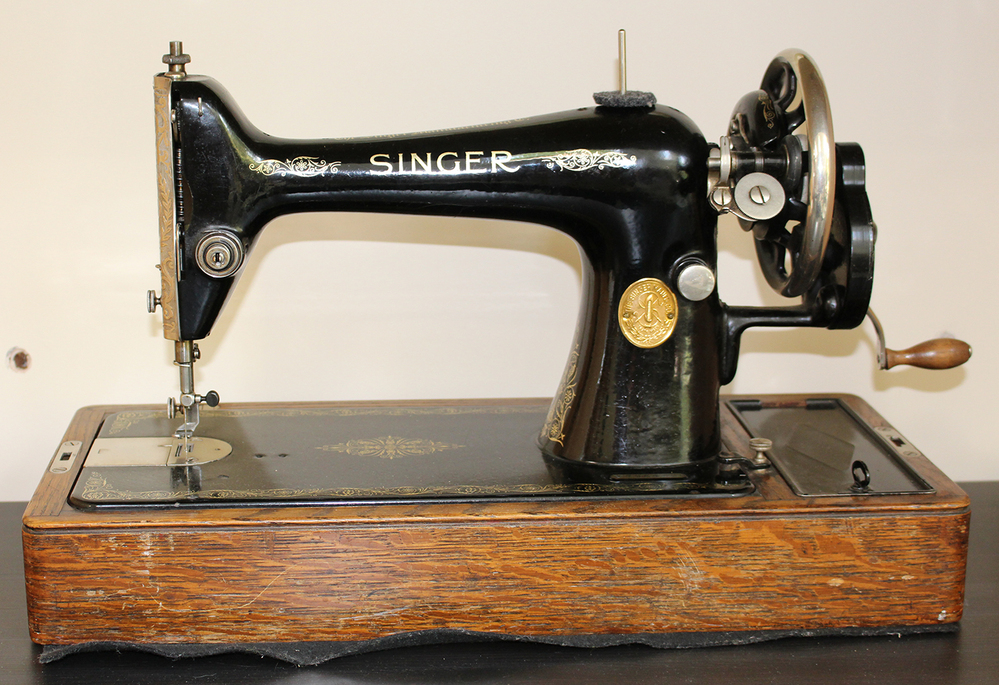 Chrissie Menzies
at the Chrysalis 'Art to Wear' Studio: